You are here: Home / Consultancy / Organisation of Workshops & Meetings

Organisation of conferences and workshops, presentation of scientific results

Due to the participation in numerous research projects ECT is experienced in organising workshops and project meetings. We offer the following services in our own premises or at other locations:

Examples of such events organised or co-organised by ECT with participant numbers ranging from approx. 20 to 150 people:

In addition, colleagues of ECT regularly participate in meetings, workshops and conferences throughout the world as speakers and chairpersons (e.g. with German authorities, industry, OECD, OSPAR and SETAC). 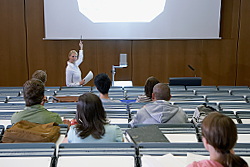